The Global Impacts of Climate Change 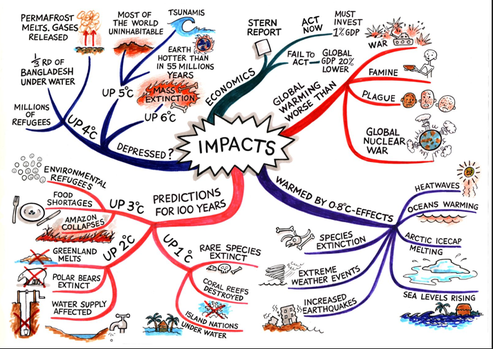 The discussion on impacts of climate change is filled with uncertainty. There is firstly great uncertainty on projected temperature rises and this inturn has a knock-on effect on the projected impacts. The latest IPCC reports reflect this uncertainty and are based on model temperature ranges linked to a number of different emission scenarios. Higher temperature rises are strongly linked with higher emissions and the longer the international community delays in making legally binding targets for cutting carbon emission the worse the scenarios become. For example there is now strong scientific consensus that without immediate legislation to cut global emissions the world is likely to exceed the 2°C target, above which the impacts become more painfull and irreversible.
The following graphic shows the probability of exceeding the 2°C temperature rise target at various CO2 levels 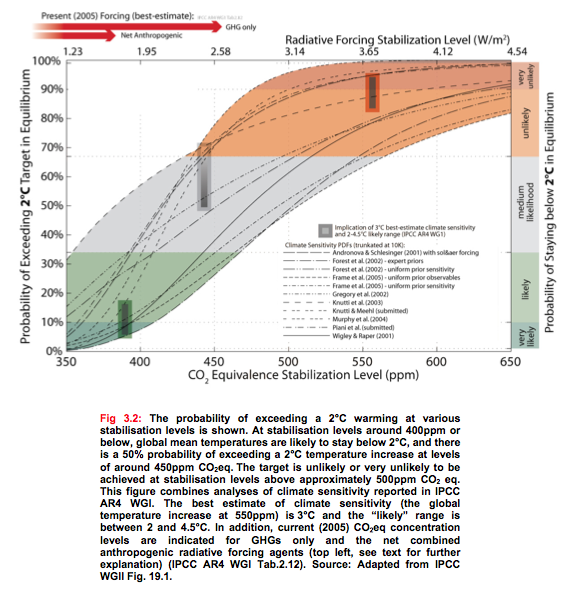 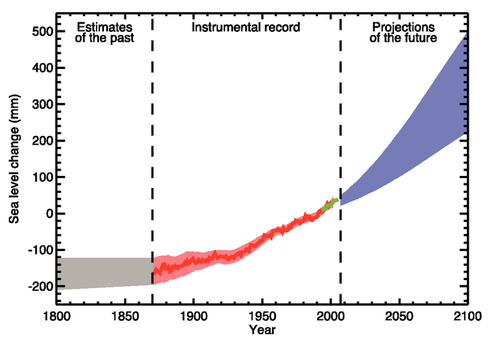 The following graph comes the 2007 IPCC report and shows the  global mean sea level (deviation from the 1980-1999 mean) in the past and as projected for the future. For the period before 1870, global measurements of sea level are not available. The grey shading shows the uncertainty in the estimated long-term rate of sea level change. The red line is a reconstruction of global mean sea level from tide gauges and the red shading denotes the range of variations from a smooth curve. The green line shows global mean sea level observed from satellite altimetry. The blue shading represents the range of model projections based on various scenario for the 21st century, relative to the 1980 to 1999 mean, and has been calculated independently from the observations. Beyond 2100, the projections are increasingly dependent on the emissions scenarios. So what appears to be certain is a projected range of between 26 and 59 cm. However this projection excludes rapid dynamical changes in ice flow, that can lead to rapid melting events. This phenomena is explained in the Crock of the Week, by Peter Sinclair. The second video follows the heart breaking dilemna of Anote Tong, the President of the Republic of Kirabati as he contemplates the collapse of his country and culture. This can be used for local responses to climate change. The third video illustrates the impacts on the Alpine region of Europe but then goes on to look at sea level rise and other socio-economic impacts. The fourth video shows the well known problems of the low-lying country of Bangladesh and shows a local response of migration away from low lying coastal land to the city in Dhaka. It also deal with creative ways the local people have adapted to the impacts. 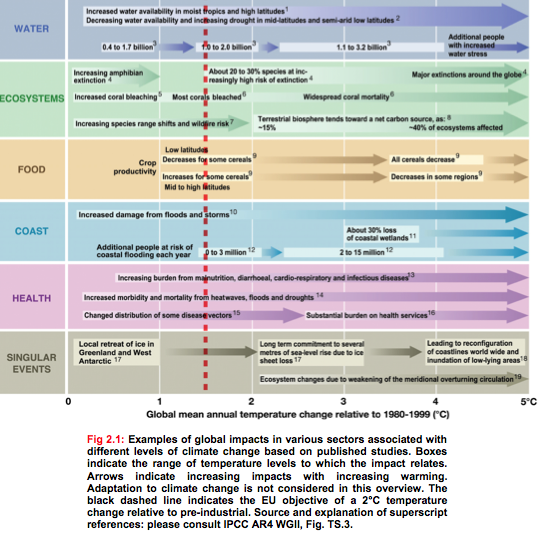 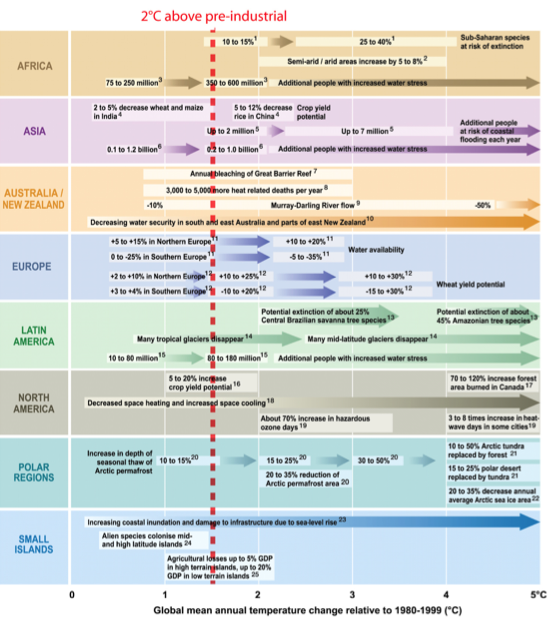 The Impacts of Climate Change on West Bengal

With close economic ties to natural resources and climate-sensitive sectors such as agriculture, water and forestry, India may face a major threat, and require serious adaptive capacity to combat climate change.  Impacts are already being seen in unprecedented heat waves, cyclones, floods, salinisation of the coastline and effects on agriculture, fisheries and health.

The future impacts of climate change, identified by the Government of India’s National Communications (NATCOM) in 2004 include. 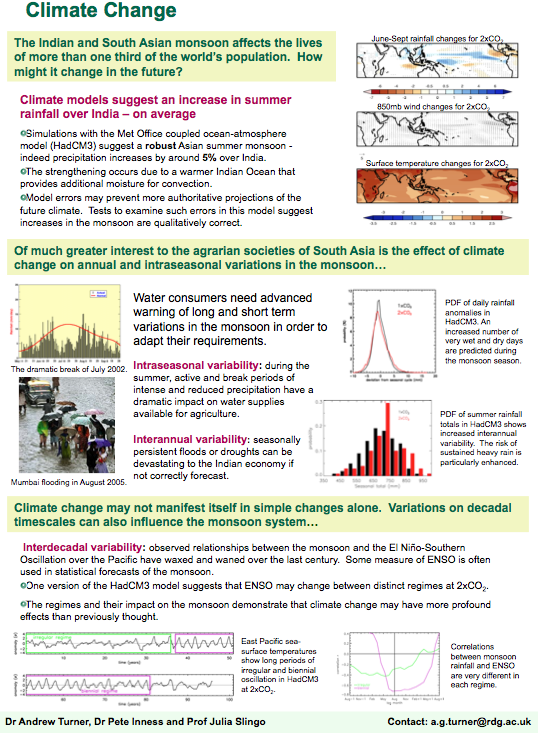 The following video develop some of these impacts in more depth.
And to finish on a positive.

The Impacts of Climate Change on the UK and UK Policy

The following two case studies provide a detailed insight into the impacts climate change on the regions of Cumbria and East Anglia.

UK climate policy has two main threads, mitigation and adaptation. Mitigation refers to the reduction of carbon emissions an d in effect targets the UK's contribution to climate change. The key driving policy for mitigation is The Climate Change Act, which established a legally binding target to reduce the UK’s greenhouse gas emissions by at least 80% below base year levels (1990), by 2050. This is to be achieved through action at home and abroad.  The Climate Change Act introduced a system of carbon budgets, which provide legally binding limits on the amount of emissions that may be produced in successive five-year periods, beginning in 2008. The first three carbon budgets were set in law in May 2009 and require emissions to be reduced by at least 34% below base year levels by 2020. The following diagram shows the first three carbon budgets. 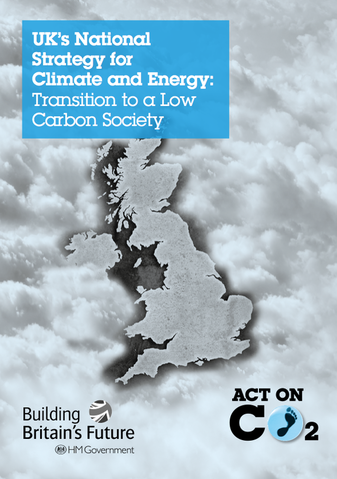 However, if the UK is to cut emissions by 80% by 2050, there will have to be major changes in how they use and generate energy. Energy efficiency will have to increase dramatically across all sectors. The oil and gas used to drive cars, heat buildings and power industry will need to be mostly replaced by electricity, sustainable bioenergy, or hydrogen. Electricity will need to be decarbonised through renewable and nuclear power, and the use of carbon capture and storage (CCS). The electricity grid will need to be larger and smarter at balancing demand and supply. However there are some major uncertainties. These include:
A second key element of UK policy is adaptation. The graph below shows historic and projected temperature rise based on a number of emission scenarios. It shows that our historic contribution of green house gases will lead to increases temperature regardless of mitigation efforts. The projected increases for 2050 will take place. This situation forces policy makers into an adaptive approach. The second diagram shows a how UK's daption wil be spily between building adaptive capacity and delivering adaptive actions.
The following two videos explain the Defra funded organisation, UKCIP who are the central agency in the UK approach to building adaptive capacity.
The following executive summary outlines in brief the UK's Carbon Plan. This paper outlines the UK policy to tackle carbon emissions. It's several pages long and well worth a read. 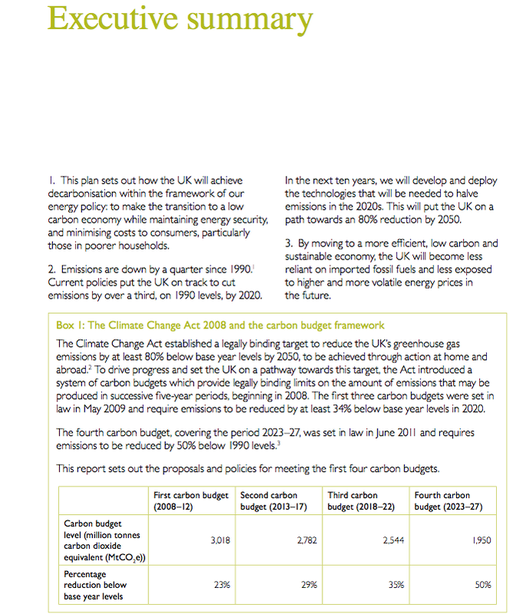 The following video explains the UK's Green Deal, which is an energy efficiency action for reducing emissiions from domestic buildings, that currently contribute 14 percent of the UK's total emissions.
Below are four case studies of adaptation methods being deployed by organisations around the UK.

There have been many examples of local responses to climate change already developed in this section of the site. In answering a question specifically about local responses it would be best develop different place examples of the responses. At the local scale there are many examples of how civic society groups are working together in their local community to combat climate change. A good example of an organisation in the UK is Campaign to Protect Rural England. This organisation has worked tirelessly in its research, campaigns and action against the global food industry and the food miles and impacts on rural England. However for the purpose of this section I think it more important to focus on how people at the local scale, and by local scale I mean the village or the even the family responds and adapts to climate change. One of the most vulnerable regions to the impacts of climate change is the drought stricken regions of the Sahel. The following videos from a BBC World series focus on the problem of desertification in Niger and follow the problems and adaptations of a number of villages in different regions of the country, from basic fencing to prevent encroaching sand dunes to a project that has empowered women and brought back degraded land back into farming through simple but back-breaking soil mangement method known as tasas.