Explaining the Distribution of Extreme Environments 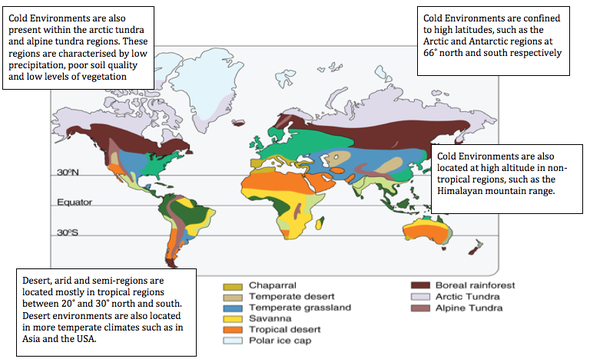 For the purpose of this course we will be focusing on extreme environments as referred to by the IB Geography syllabus. There are broadly two types, firstly cold and high altitude environments, including polar, glacial areas, periglacial areas; high mountains in non-tropical latitudes and secondly hot, arid environments including hot desert and semi-arid areas. The distribution of these environments is described in the map to the left and shows cold environments to be largely confined to the planet's extremities, such as te poler regions and arctic tundra. These regions can also be referred to as cold deserts due to the extreme low levels of precipitation in the year. Hot deserts and arid environments are generally confined to the subtropical belts between 20˚and 30˚north and south although temperate deserts, such as the Sonoran in southwest USA and the Gobi desert of China and Mongolia also form outside the tropical region.

The Tricellular Model and Precipiation Patterns 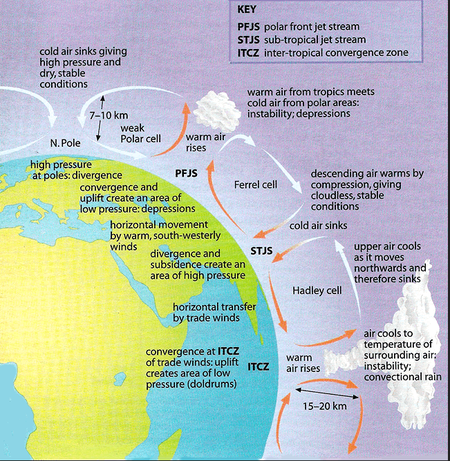 Source: Waugh
Because the Earth receives and uneven distribution of insolation there is an inbalance in temperature within the atmosphere. If this inbalance remained uncorrected then the tropical regions would become too hot and the polar regions too cold. The planet therefore redistributes heat from the tropics to its colder extremities, in an attempt to find equilibrium. It does this through two main channels. Firstly, great atmospheric convection cells and secondly ocean currents. For the purpose of this course we are mostly interested in atmospheric processes, as they help determine the location of the world's greatest deserts.

The diagram to the right shows the tricellular model for the northern hemisphere. The model is replicated for the sourthern hemisphere. The Inter Tropical Convergence Zone (ITCZ) marks the point of the overhead sun and we have already learned that this point migrates north and south due to the Earth's axis of tilt and rotation around the sun. On June 21 the position of the ITCZ reaches the Tropic of Cancer and by December 21 it has reached the Tropic of Capricorn. Along this point insolation is at its strongest and in turn convectional processes are also at their strongest. Heat drives evaporation. As air becomes heated it loses density and becomes lighter than surrounding air. As air rises it forms a global band of low pressure. This is marked out by the ITCZ, which migrates in proportion to the position of the overhead sun. This migration of the ITCZ can be seen in the rainfall patterns of Nigeria as well as in the animation below.

Rainshadow deserts like that found at the temperate latitudes of Northern America create deserts and arid conditions through oragraphic processes. Warm moist air moves across the coastal range and is forced upwards due to the natural barrier of the Sierra Nevada Range. This uplift of air forms oragraphic rainfall on the windward side of the mountains. As air rises it cools and its relative humidity rises until it beocmes saturated and condensation takes place forming clouds and rainfall. Once the air passes over the mountains it slowly begins to sink. As the air sinks it becomes warmer and its relative humidity decreases, locking that water vapour inside the air. In this way the Nevada desert forms on the leeward side of the mountain. The process of relative humidity is illustrated in the diagrams below.  As temperature rises the same amount of water vapour falls realative to the capacity of the parcel of air.

Continental deserts like the Gobi in China and Mongolia form as a result of their location in continental interiors. Most rain-carrying currents come from the sea, picking up moisture along the way. The air moves over the land it gets drier and drier inland and therefore creates deserts or arid environments. These deserts are called continental deserts because of their location inland. They have the most fluctuating temperatures in the world. For example example: in Gobi, the temperatures range varies between 45ºC in summer and -40ºC in winter.

Sometimes deserts can form between oceans and mountains.  The Atacama desert in Chilli, South America is dry because of the meeting of two air masses carrying little or no moisture. The prevailing wind comes from the east and creates rain on the windward (east) side of the Andes. As this air passes over the Andes it begins to sink and warms lockling water vapour inside. Secondly, cold air that has been unable to pick up mositure from evaporation comes into the coastal range from over the Pacific. However it is unable to rise due to a temperature inversion from above. A temperature inversion traps the cold air below and only fogs can form. This is illustrated in the diagram below.

The diagram to the left is a cross section of the northern hemisphere and shows the three global convection cells that form the tricellular model. The Hadley Cell has already been explained. It has a low pressure region, typically over the equator but which migrates with the position of the overhead sun (ITCZ). It also as a high pressure region that forms tropical anticyclonic conditions. In this region air is sinking and warming and forming the major tropical deserts.
The same pattern of air movement can also be oberved within the Ferrel Cell between latitudes 30º and 60º and within the Polar Cell from 60º to North Pole. Effectively this sinking of air at the Pole creates anticyclonic conditions where very little precipitation falls. Air is sinking and despite it being cold, its relative humidity is low and so water vapour becomes locked inside the air. Any amount of precipitation that does fall, falls is in the form of snow and throughout the year winds tend to shift the snow around like desert storms. 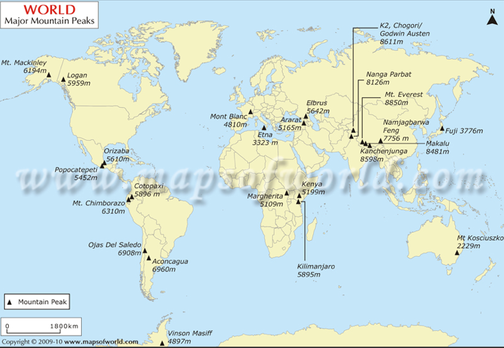 Extreme environments are also located in high mountain ranges. The world's tallest peaks can be found in the map to the left. Mountains form through uplift processes associated with tectonic processes and contintental drift. As plates move past each other and collide, the crust becomes folded and thrusted upwards. In doing so the crust is uplifted and mountains form. The world's mountain ranges follow a distinct pattern in their location and generally form along plate boundary zones. The world is divided in many plates some larger than others. They are moved by convectional processes within the mantle and at points where they meet either subduction processes and/or uplift take place. 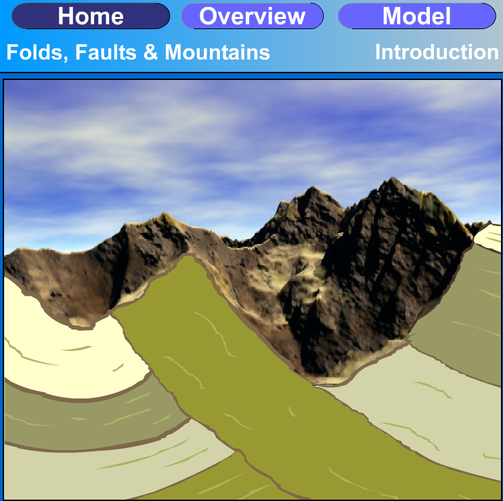 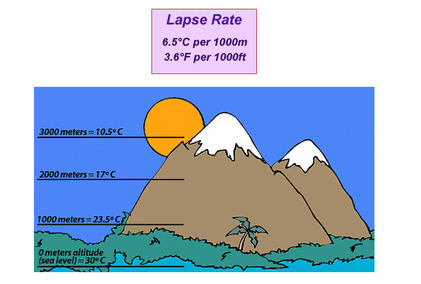 As you climb a mountain, you can expect the air temperature to decrease by 6.5ºC for every 1000 meters you gain. This is called the environmental lapse rate. For example if air temperature is 30ºC at sea level as shown to the left  you can expect temperature to have fallen to 10.5ºC at the altitude of 3000 meters. This phenomina takes place firstly, due to the source of heating being at surface level and secondly because of differences in pressure.

Air at higher altitude is cooler because the pressure is lower. Gases expand at lower pressures. As a gas expands, the molecules (and atoms) within it move more slowly. Since air temperature is just a measure of how fast the molecules in air are moving, the rate of motion of molecules and the temperature are both lower at higher elevations.

Secondly, the troposphere is warmest at sea level and cools upward because the Earth’s atmosphere is heated from below. The atmosphere is mostly heated by the surface of the earth below and not directly by the Sun from above, even though the upper atmosphere is closer to the Sun. Therefore the higher you rise in altitude the less surface area there is to heat the air aorund it. The resulting environment is one of greater extremity proportional to altitude. This means colder and more extreme atmospheric conditions combined with steep and weathered surfaces.

High mountains are for me the most extreme of all environments, with unpredictable weather including heavy snowfall, extreme low temperatures and high wind speeds. This results in high rates of physical weathering, which creates the most stunning landscapes imaginable, with steep faced cliffs and razor sharp aretes. This makes them the most remote and inhospitable of places for all mankind. 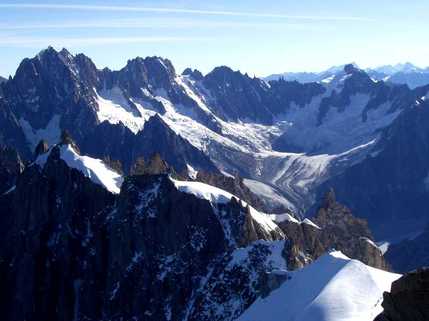 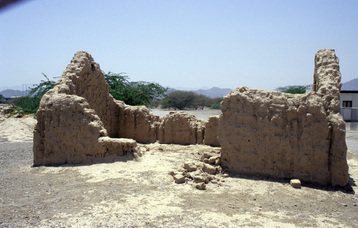 Extreme environments by their very nature suggest that human habitation poses many challenges. Extreme dry and arid environments offer little in the way of natural resources, such as clean water and fertile soil to support humans. However, this is not to say that it is impossible to support life. There are many examples of remote tribal groups that live a subsistence existance within and around the fringes of deserts. However, population density for these regions is very low. For example the Western Sahara has as little as 1 person for evey 1km and the country of Namibia has only 2 people per km. The map below shows a distinct pattern of low population density in all the extreme environments discussed above.

Hot deserts with their absence of water and vegetation lead to a migratory lifestyle, with many nomadic herders moving cattle, goats and camel across miles of desert and arid regions, which in Africa can be transnational. The Aboriginees of Australia are notrious for their hunting and gathering skills and many indigenous tribes of both East and West Africa like the Fulani of Niger are travelling thousands of miles in their search for good pasture. 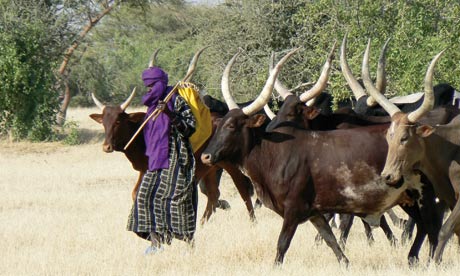 Similarly, cold polar regions and tundra as well as high moutainous regions pose problems for human existence. The hostility of these environments makes living very challenging. Generally speaking the polar environments are too extreme to support life and are mainly absent of permanent human settlements. Mountainous regions vary enormously at both the regional and local scale. Low lying more accessible mountainous regions act as economic cores within the region. Economic activity develops as well as tourism but in remoter less accessible regions it is impossible to support life and these areas are increasingly experiencing outward migration. At the local scale, aspect makes a big difference. South facing slopes in the northern hemipshere receive more solar radaition and consequently support more vegetation and human habitation. North facing slopes are cold and high altitudes become the seeding ground for valley glaciers. Generally mountainous areas only support a thin soil base and this is often lost by rapid rates of erosion and surface run-off. Permafrost regions, which either remain frozen for part of the year or all the year round tend to be frequently waterlogged and building construction with modern heating systems can defrost the ground foundation causing subsidence. Due to frozen ground, water supply is also very challenging. These regions such as Greenland and Northern Canada are only really suitable for herding. With poor vegetation a vast area of terrain is required for the herds. In many regions this has led to a migratory pattern of nomadic existence, such as the Inuit of Arctic Regions who migrate around seasonal changes either following herds and then moving towards coastal plains for the fish and whale stocks.

Despite climate and remoteness being clear barriers to human habitation this is not to say that human development is not possible. Mountainous regions by their very nature are generally inaccesible and transport routes are dangerous and slow. However, in post glacial environments, valley glaciers leave behind wide u-shaped valleys that have breached mountain sides creating perfect transport routes for car and rail. The steep nature of mountainous areas makes development difficult but with human effort and creativity development is possible provided the climatic conditions allow.